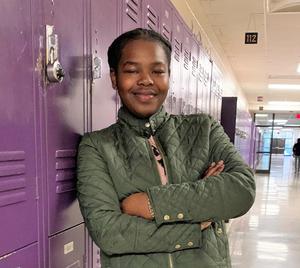 Meet Zamiya Howell - a ninth-grade student at Tarboro High School who returns to her former middle-school, W.A. Pattillo, each week to mentor females into confident young women. Read about her in the article published in the Rocky Mount Telegram.

The article below was written by Paige Minshew and published in the Rocky Mount Telegram on  November 18, 2019.

Zamiya Howell may look like an average teenager, but she is far from it.

As a student-athlete at Tarboro High School and mentor to girls at her former school, W.A. Pattillo Middle, Howell has her hands full at only 14 years old.

In a world obsessed with appearance, young women are constantly subjected to unrealistic expectations of how they should look, dress and even act. Howell committed herself to helping young women boost their self-esteem after observing her own friends and “influencers” on social media struggle to accept who they were.

Spurred by those experiences, she created her own company, Dividing Appearance.

Howell said it bothered her to see young women being conditioned to believe appearance was paramount to a positive and productive life. It bothered her even more that these young women worked so hard to be accepted by their peers and the world around them, she said, yet were unhappy with who they are.

That’s why she said she felt it vital to start a business that has an ultimate purpose to teach young women to love themselves. Even with a full plate of community activities, school and athletics, Howell returns every Friday afternoon to W.A. Pattillo to mentor young female students.

W.A. Pattillo Principal Lauren Lampron said she applauds Howell’s dedication to challenging young girls to love themselves, adding that she “will forever be grateful for her continued support of our school.”

As CEO of Dividing Appearance, Howell creates skits and exercises for young women, which are used to encourage them to be comfortable with who they are, their appearance and to appreciate the people they are becoming. She likes to call these activities “DA Bonding,” which stands for Dividing Appearance Bonding.

With the help of Shannon Bynum, founder of Pretty Sweet Bee Mentoring, Howell said she is confident her efforts inspire the young women she mentors. She also stresses the importance of higher education and its importance in the real world.

“If you have an education, your knowledge will speak louder than your appearance,” she told the girls on Friday.

In addition to working hard as a freshman at Tarboro High School, mentoring young girls and running a business, Howell also is writing a book about her own struggles with self-esteem and how she is using those experiences to encourage others to accept themselves.

Howell has emphasized that her methods are not only for young women. She expects to take her business further than middle school mentoring and confidently says that she is determined to help females of any age, race or background improve their self-esteem and practice self-love.