Blake Gosselin selected as ECPS Employee of the Month 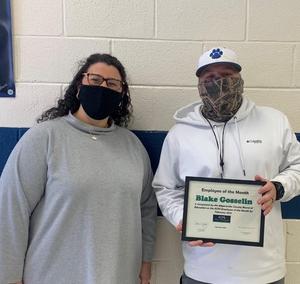 Blake Gosselin, Physical Education teacher and Athletic Director at West Edgecombe Middle School, was recently recognized as the ECPS Employee of the Month for February.
According to West Edgecombe Principal Kelsey Ballard, Gosselin is always willing to go the extra mile for all students.
"When the school year began, we at West Edgecombe were without a DLC. This was a problem as many students and families needed technical support due to online learning. Coach Gosselin stepped up to help. He worked in the office each day, answering phones to help troubleshoot technology issues. When he couldn’t resolve the issue over the phone, he invited the family to the building and he hosted technology training sessions for them. He went to any length needed to ensure all students had a working Chromebook and the knowledge needed operate the device and access assignments as required," said Ballard.
"Before students returned to in-person learning, he volunteered to lead the Cokey Learning Pod. He transported supplies and set up the space to ensure students had a safe place to learn. He arrived early each morning and stayed late into the afternoon, putting kids first instead of working from the comforts of the school building. He walked around the complex to recruit kids, called parents and families, and tutored kids to encourage them to return to the pod the next day.  Since in-person learning started, we have been short on bus drivers, said Ballard.
"Coach Gosselin has his bus license and has agreed to drive a morning route several days each week in the absence of a permanent driver," added Ballard.
Gosselin was presented with a gift card to a local establishment from Greg Farms, State Farm Agent in Tarboro.
Print