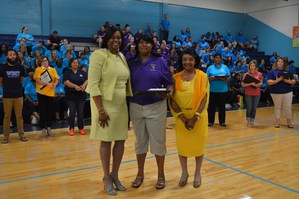 During the recent Edgecombe County Public Schools Convocation, Rita Batts was named the district’s 2017-18 Teacher of the Year. Batts is an Exceptional Children’s teacher at Tarboro High School.

Batts was selected out of a pool of fourteen teachers who were nominated for this award. Teachers from each of the district’s fourteen schools were named teachers of the year to represent their respective schools.

“Ms. Batts is a true ambassador of the teaching profession.  She is committed to excellence and will go beyond the call of duty to create an engaging, personalized, and hands-on atmosphere of learning for her students,” said Robert Batts, Director of Secondary Education. “She is a true servant leader who strives to instill in her students the power to believe in themselves and in their abilities.”

She will now compete in the regional process against teachers in surrounding counties who, like ECPS, are in the North Central Region. The selected candidate will compete in the state process to be named as North Carolina’s Teacher of the Year.

Teachers are recommended for this honor by their colleagues and each school chooses one teacher to represent the school at the district level. Those selected submit portfolios which are evaluated by a panel of community members and educators, basing their scores from a rubric. The top six candidates participated in an interview process and these individuals were also scored. From here, the person with the highest score is named Teacher of the Year.