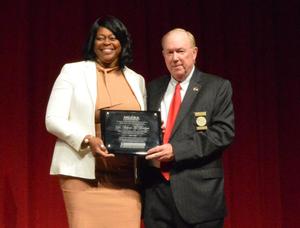 Dr. Bridges has worked in public education more than 30 years, serving in all levels from teacher to administrator. She became Superintendent of Edgecombe County Schools in 2017 and quickly implemented changes to foster an environment of inclusion and positivity, inspiring students in her district to achieve. Her efforts have led to a 70% increase in district schools meeting or exceeding growth requirements in the region.

"Dr. Bridges is a shining star and an example for students,” said NCSSA Executive Director Jack Hoke. “Her diligent efforts have greatly improved the educational experience and outcomes in her district. She seeks constant improvement and creates a synergy of focus from teacher to student and from parents to school board members. I cannot think of a better recipient for this year’s award."

Under Dr. Bridges’ leadership ECPS has seen marked improvement in overall learning through the creation of the Micro School concept – a holistic approach tailored for the individual student to receive constant oversight and support, while also inspiring them to excel. Since the micro schools were implemented in 2018, participating students have continued to outscore their non-micro school peers significantly on every state assessment. In addition, student discipline referrals have also decreased by approximately 50%.

In a time when school boards and parents are often at odds, Dr. Bridges has helped create a collaborative effort between families and the school board by blending student and parent feedback into current and future ECPS strategic goals.

Dr. Bridges was joined by seven other North Carolina Regional Superintendents of the Year, all of whom were nominees for this prestigious state award. The following regional winners were honored at the Nov. 11 ceremony: