Armour selected as ECPS Teacher of the Year 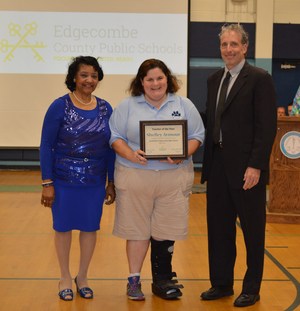 Shelley Armour was named the district’s 2016 Teacher of the Year at the recent ECPS Convocation.

Armour is beginning her fifth year as a Career and Technical Education teacher at SouthWest Edgecombe High School. Previously, she taught for seven years in Maryland.

Armour was selected out of a pool of fourteen teachers who were nominated for this award. Teachers from each of the district’s fourteen schools were named teachers of the year to represent their respective schools.

“I am honored and humbled to represent such an amazing team of teachers in Edgecombe County Public Schools as our district Teacher of the Year. It is my hope as I serve in this position to further the impact of ECPS on our community and celebrate the many accomplishments of our students & staff,” said Armour.

She will now compete in the regional process against teachers in surrounding counties who, like ECPS, are in the North Central Region. The selected candidate will compete in the state process to be named as North Carolina’s Teacher of the Year.

Teachers are recommended for this honor by their colleagues and each school chooses one teacher to represent the school at the district level. Those selected submit portfolios which are evaluated by a panel of community members and educators, basing their scores from a rubric. The top five candidates participated in an interview process and these individuals were also scored. From here, the person with the highest score is named Teacher of the Year.

2016 School Level Teachers of the Year