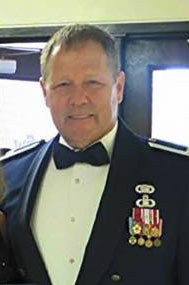 SouthWest Edgecombe High School JROTC instructor Col. Mike Whitehurst has been nominated for the 2016-17 National LifeChanger of the Year Award.

Sponsored by the National Life Group Foundation, the National LifeChanger of the Year program recognizes and rewards the very best K-12 public and private school educators and employees across the United States who are making a difference in the lives of students by exemplifying excellence, positive influence and leadership.

Whitehurst was nominated by a colleague, Shelley Armour.

“When I first heard about LifeChanger of the Year, Col. Whitehurst immediately came to mind,” said Armour. “He is a LifeChanger in our school and district, and his impact has a reach that goes far beyond his classroom.”

Whitehurst instills the values of community service and school pride in his cadets. He spends the summer painting the school so that SouthWest Edgecombe High School has a fresh coat of paint every year and a clean exterior. His cadets maintain this level of cleanliness during the school year by picking up trash, pine cones and fluffing pine straw under trees. Whitehurst saw that SouthWest Edgecombe's maintenance team needed help and worked to provide this help as an example of the Air Force’s core values of integrity and service.

“I will never forget the first thing Col. Whitehurst said to me when I started at this school: ‘Welcome Home,’” said Armour. “This school is a second home for many teachers and students. It's LifeChangers like Col. Whitehurst that make it a safe and appealing place to work and learn.”

When a cadet graduates from SouthWest Edgecombe, they stay in contact with Whitehurst as they move through life post-high school, whether it be in the military, college or workforce. His support for his students never ends and that is reflected in the respect they give him. He continues to be a mentor and supporter of his cadets.

Each school year, the LifeChanger of the Year program receives hundreds of nominations from all 50 states and the District of Columbia. For 2016-2017, there will be a total of 15 individual LifeChanger of the Year awards. In addition, a 16th prize, the “National Spirit Award,” is given to the school and nominee whose community demonstrates the most support for their nomination. Each winner will receive a cash award that is split between the individual winner and their school. The national Grand Prize award is $10,000. Winners are announced via surprise award ceremonies held at their schools. The top five winners will also be honored at a national awards ceremony in Naples, Florida. Winners will be announced in Spring 2017.

Winners will be chosen by a selection committee comprised of former winners and education professionals. Nominees must be school district employees. Award winners are selected based on the following criteria:

To view Col. Whitehurst’s LifeChanger of the Year nominee profile, or to nominate someone from your school community, visit www.LifeChangeroftheYear.com.